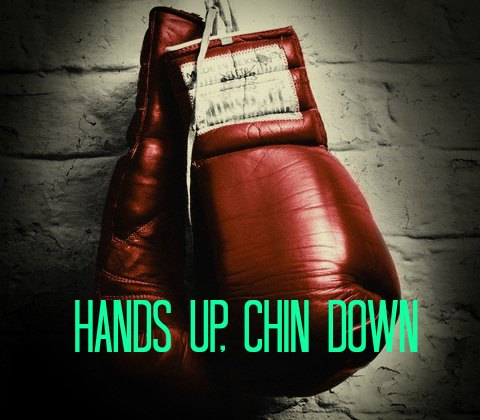 In boxing, the best position to assume is hands up, chin down.  This is a fighting stance, making the boxer ready for anything, to throw a punch or take a punch.  If a boxer steps into the ring, carelessly, with their hands down and chin up, they’ll be on the canvas within seconds.  In the Christian life, which is an absolute fight, you must keep your hands up and chin down, or else.

“Fight the good fight of faith.  Take hold of the eternal life to which you were called…” (1 Timothy 6:12)  Here, Paul describes our Christian faith as a fight.  In another Scripture, Paul says, “I do not run aimlessly; I do not box as one beating the air.” (1 Corinthians 9:26)  The Apostle Paul, a true warrior for the gospel, wanted us to know that the Christian faith isn’t simply shadowboxing, but true hand to hand combat.  Whom do we fight?  “For we do not wrestle against flesh and blood, but against the rulers, against the authorities, against the cosmic powers over this present darkness, against the spiritual forces of evil in the heavenly places.” (Ephesians 6:12)  Not clear enough?  Peter says, “Your adversary the devil prowls around like a roaring lion, seeking someone to devour.” (1 Peter 5:8)  Yes, we are in the ring against the devil.

“I’ve never seen the devil attack me,” some say.  Many Christians miss him, for after all, “even Satan disguises himself as an angel of light.” (2 Corinthians 11:14)  Perhaps you’ll recognize him by his signature moves.  The enemy doesn’t throw jabs and uppercuts, but sends opportunities to sin:  a disagreement with a loved one, a chance to watch something we shouldn’t, a busy schedule that leaves no time for God.  Recognize him now?

Keep the fighting stance, “rise and pray that you may not enter temptation” as Jesus says in Luke 22:46.  This enemy is like a skillful boxer who sets us up for a devastating blow.  The disagreement with a loved one happens when we’re already having a bad day; the chance to watch that inappropriate show comes when we’re exhausted; our lives get busy, not with bad things, but with noble things, yet still push God out.  These wicked schemes of the devil prove he’s here “only to steal and kill and destroy.” (John 10:10)  If we don’t wake up to this fight, keep our hands up, chins down, and minds on Jesus, we will certainly get battered like an unprepared, unskilled boxer fighting a heavyweight.  Lastly, “So then let us not sleep, as others do, but let us keep awake and be sober.” (1 Thessalonians 5:6)

0 comments on “Hands Up, Chin Down”