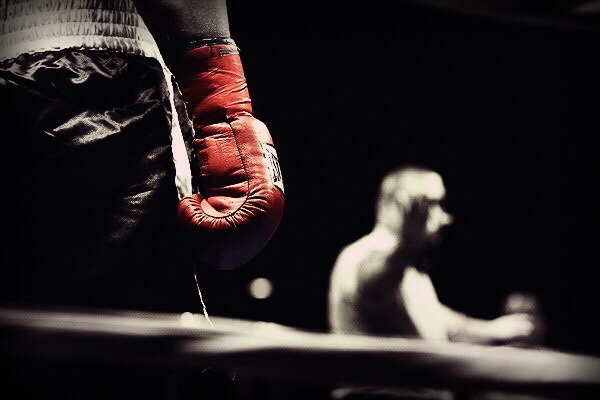 In the 1976 film, Rocky, the main character, Rocky Balboa, gets the once-in-a-lifetime opportunity to fight the heavyweight champion, Apollo Creed.  Though a mere part-time club fighter, Rocky takes the champ’s best punches and stays on his feet into the 14th round, defying the odds.  In the 14th, Apollo finally knocks down the contender; as Rocky clumsily reaches for the ropes, from his own corner, his trainer, Mick, orders him, “Down, down, stay down!”  Rocky disregards the warning, staggers to his feet, and despite his obvious exhausted state, lifts his arms to fight and challenges Apollo by urging him, “C’mon.”  As Christians, we fight daily to live a different life, but when we fall, what gets us back on our feet, ready for more?

In Luke 24, we’re told of two men walking on the day of the Resurrection from Jerusalem to a village called Emmaus.  Unknown to them, Jesus joins them and asks what they’re discussing.  “Concerning Jesus of Nazareth, a man who was a prophet mighty in deed and word before God and all the people, and how chief priests and rulers delivered him up to be condemned to death, and crucified him.  But we had hoped that he was the one to redeem Israel.  Yes, and besides all this, it is now the third day since these things happened.” (v. 19-21)  These men were in the fight with Jesus, but their dreams were knocked down when the world crucified him.  We often lose our footing when we’re with a relationship problem, financial challenge, or a sin we struggle with.  These hits leave us flailing on the canvas, trying to find a reason to continue this Christian fight.  We may even have a Mick from our own corner, whom we trust say, “Stay down!”

As we read on, the two men invite Jesus to stay with them.  “When he was at table with them, he took the bread and blessed and broke it and gave it to them.  And their eyes were opened and they recognized him.  And he vanished from their sight.  They said to each other, ‘Did not our hearts burn within us while he talked to us on the road while, while he opened to us the Scriptures?” (v. 30-32)  It was an encounter with Jesus that got these men back on their feet and turned them into purpose-driven evangelists!  “And they rose that same hour and returned to Jerusalem.  And they found the eleven and those who were with them gathered together, saying, ‘The Lord has risen indeed, and has appeared to Simon!’  Then they told what had happened on the road, and how he was known to them in the breaking of the bread.” (v. 33-35)

If we look for others to give us the reason to go on, to continue fighting, we’ll usually be let down.  After all, our friends and family are also flesh and blood, fighting their own battles.  “If then you have been raised with Christ, seek the things that are above, where Christ is, seated at the right hand of God.” (Colossians 3:1)  These men on the way to Emmaus realized that the world’s hits will take anyone down, but the words of Jesus Christ can set our hearts ablaze with motivation and get us back in the fight.  “And do not be grieved, for the joy of the Lord is your strength.” (Nehemiah 8:10)

0 comments on “Jesus Gets You In For One More Round”